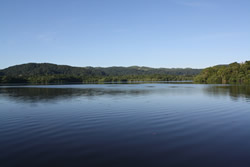 West Indian Manatee (Trichechus manatus), which can be seen at the Laguna Grande Reserve © Germanico Barrios

World Land Trust’s Guatemalan project partners FUNDAECO are in the process of drawing up a management plan for the Laguna Grande Reserve purchased with the support of the World Land Trust in 2009. This reserve covers 657 hectares and is situated in the Río Sarstún watershed in Caribbean Guatemala, on the border with Belize. It protects an important lagoon habitat. The small team working on the management project consists of a coordinator, agroforestry technician, environmental educator and three park guards. The guards have already had an important role to play in the protection of this vital habitat: Whilst out on patrol they intercepted people illegally taking palm leaves which are used widely for roofing materials. On another occasion recently FUNDAECO guards were patrolling a forest area situated about 5 kilometres from Laguna Grande, which revealed illegal deforestation of about 7 hectares of forest. The role of the guards is vitally important in the protection of this important forest. FUNDAECO have also begun small-scale ecotourism at the reserve. They have established a modest visitor centre, situated about 5 kilometres from the Laguna Grande property, and have also taken tourists on boat trips around the reserve lagoon system. These lagoons are important habitat for a wide range of biodiversity and tourists are able to see species such as the West Indian Manatee (Trichechus manatus). The next stage of the tourism programme will be the construction of a mountain refuge and visitor trail, in order to attract more eco-friendly visitors to the newly created reserve. Local people are very much part of this project and FUNADECO are working closely with the nearest community to the Reserve, where they are carrying out two development projects: Training of Q'eqchí women as tourism caterers; and aquaculture of native species of fish with local fishermen. The new reserve will be jointly managed by FUNDAECO and a local community association called Amantes de la Tierra, with whom FUNDAECO has established a partnership in order to co-manage the entire Río Sarstún with local community involvement. Find out more about the Laguna Grande Reserve