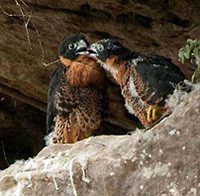 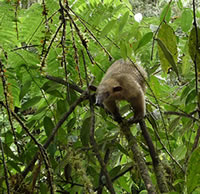 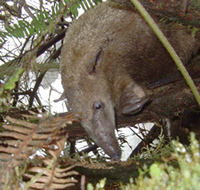 A rare sighting of a Tamandua. This is the Southern species, which in this area lacks the black markings.

Rarely recorded in Ecuador, Fundación Jocotoco were delighted to find this nest with two robust young almost ready for fledging, on the edge of Narupa Reserve. The nest is typically placed on a cliff on the edge of the forest, giving the birds an excellent vantage point from which to hunt. Relative to its size this species has particularly large feet and beak enabling them to capture a wide range of prey from medium-sized to large birds (particularly doves, parakeets, and swifts), bats, and large insects, in flight. Very little is known of the status of the Orange-breasted Falcon Falco deiroleucus, even though its range in Neotropical forests covers south-east Mexico to Paraguay and Northern Argentina. However, nowhere is it common and it is often confused with the similarly plumaged Bat Falcon, which also has an orange breast, but is a commoner species. The Narupa reserve was purchased in 2006 and currently protects 300 hectares (720 acres) of tropical forest in eastern Ecuador. It is hoped to extend the reserve this year to link up with Parque Nacional Sumaco. This area is considered a priority as it is extremely rich in endemic bird species, many of which are globally threatened.

These photographs were taken on the Río Zuñac Reserve, owned and protected by Fundación EcoMinga. The Tamandua, or Lesser Anteater, has a range covering much of Central and South America as far south as Argentina and Uruguay, however, nowhere are they common. There are two species: the Northern (Tamandua mexicana) and the Southern (Tamandua tetradactyla), and both species occur in Ecuador, although their ranges do not appear to overlap. They are usually tan coloured with a blackish “vest” around the shoulders and on the body, but some are entirely tan or entirely black. The animal photographed is the southern species which occurs east of the Andes and Lou Jost of Fundación Ecominga, says that in this part of their range they are generally creamy in colour and lack the black vest. Tamanduas weigh between 2 and 7 kg and live up to 9 years. They are mainly nocturnal, nesting in hollow tree trunks or using the burrows of other animals. Unlike the Giant Anteater they tend to be arboreal, although they do frequently come to ground. Whereas the Giant Anteater walks on its knuckles, Tamanduas have adapted to avoid puncturing their palms with their sharp claws by walking on the outside of their hands. The single young, born in spring, has a different colouration (often pure white or black); it rides on the mother's back while it is small, sometimes being deposited on a safe branch while she forages. Tamanduas have been heavily persecuted in the past for their meat and their thick hides, and also for the thick tendons in their tails, which were used to make rope. Find out more about the WLT supported Ecuador reserves and the species found there