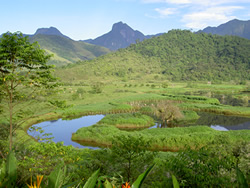 The Guapi Assu Reserve (REGUA) where the research is taking place.

Amphibian diversity in the Atlantic Forest

PhD student Luciana Fucinatto is currently studying amphibians on the reserve, including the frog Euparkerella brasiliensis, which is only found in the Atlantic Forests of Rio de Janeiro state. Little is known about its status and behaviour and Luciana is looking at the basic biology of the frog and the effects of habitat loss and forest fragmentation on the population dynamics of the species. The study hopes to not only generate a greater knowledge about this particular frog species but also aims to learn more about the diversity of amphibian species of the Atlantic Rainforest. Loss of rainforest habitat and resulting fragmentation means that populations are increasingly isolated and, importantly, high mortality in some amphibian species is known to occur when attempting to migrate over areas of cleared ground. The researchers involved with this PhD project will identify corridors of land between areas of forest within the REGUA reserve where replanting of areas cleared in the past will be of benefit to biodiversity.

Jorge Bizarro, a Post Doctorate student in Rio de Janeiro, started as part-time Research Co-ordinator at REGUA earlier this year. Working with Brazilian Institutions and Universities, Jorge, who has a keen interest in entomology, will co-ordinate research projects with a particular focus on the many taxonomic groups of Lepidoptera (moths and butterflies) that remain unstudied in the reserve. Find out about The Brazilian Rainforest Project »