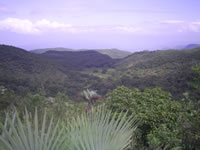 Roberto Pedraza, from WLT's Mexican partners Grupo Ecológico Sierra Gorda (GESG), visited the UK in March as part of a programme supported by the World Land Trust. Roberto gave presentations at three venues during his visit, which was aimed at raising awareness of the work of GESG within the Sierra Gorda Biosphere Reserve.

Spanning an incredible one million acres, the Sierra Gorda Biosphere Reserve is believed to be one of the largest community-run natural protected areas on Earth. Working with 100,000 inhabitants across 638 communities, GESG are involved with a variety of activities from land purchase to education to recycling. To date WLT has funded the purchase of 1,780 acres of habitat within the Sierra Gorda Biosphere Reserve, as well as providing support for the reserve's carbon programme. Sierra Gorda is a biodiversity hot spot holding 10 different vegetation types, six species of cat, as many as 327 species of bird and plants new to science constantly being discovered; 22 species new to science were discovered recently. The work of GESG is a great conservation success story, with the local communities very much at the heart of its success. This year WLT hopes to raise funds to support GESG's land purchase programme. This will depend on WLT being able to raise the funds, primarily from corporate supporters. Watch Roberto's presentation on the conservation work of GESG, on the University of London website. Learn more about the project in Sierra Gorda, Mexico »