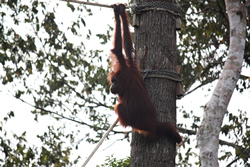 For the first time ever, a wild Orang-utan has been photographed crossing a bridge. The World Land Trust (WLT) recently received this exciting news from our project partners, Hutan, in Sabah, Malaysian Borneo. The news came from Dr Marc Ancrenaz, who also heads up the Kinabatangan Orang-utan Conservation Project. 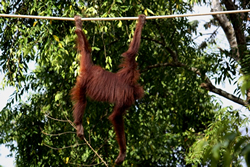 This wild, unflanged* male was photographed by Ajiran Osman, a member of the local community with an interest in wildlife, as it ventured into the unknown in search of new habitat. Mr Osman said that the red ape appeared to be weighing up whether to cross the bridge or not, lingering for about twenty minutes before deciding to take the plunge. "It seemed like once he decided to cross, he did so very fast, going over in about three minutes." Orang-utans have occasionally been reputed to have crossed man-made bridges, but this is the first official evidence. In 2003 Hutan and the Sabah Wildlife Department installed a number of rope bridges across tributaries of the Kinabatangan in order to reconnect fragments of the Lower Kinabatangan Wildlife Sanctuary (LKWS) for Orang-utans. These bridges have become necessary because the large trees that provided natural bridges over wetland and river tributaries have been lost in deforestation, and also because drains built by oil palm producers, leading to the mighty Kinabatangan River, have further fragmented the forest. The land in the Kinabatangan flood plain is very wet and, since Orang-utans cannot swim (in contrast to other primates) their movement through water is hampered. This means that once the trees spanning the rivers are removed populations become isolated from one another. The rope bridges were a simple solution but until this year there had been no recordings of Orang-utans using them, even though other endangered primate species, such as macaques, Proboscis Monkeys and gibbons have been benefitting from them.

A recent "Population Viability Analysis" by Bruford et al. concluded that most of the 20 sub-populations of Orang-utans throughout the fragments of the LKWS will go extinct in the foreseeable future unless their forest habitats are reconnected. WLT continues to raise funds for the purchase of critically important wildlife corridors in the area that will permanently connect standing forests and protect them in perpetuity. You can help, by supporting our vital Orang-utan Appeal. * The absence of flanges or cheek pads in this young male means he is not yet dominant. The flanges do not start to develop until the age of 12 and only develop on the most dominant males. When the dominant male dies another may develop cheek pads and can drastically increase its muscle weight in a short time.