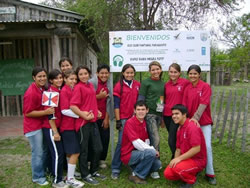 In 2005, Guyra Paraguay, project partner of the World Land Trust (WLT), established an open community group for the people of the remote town of Bahía Negra, the nearest population to the Pantanal Reserve and Three Giants Biological Station. Since then the Eco Club Pantanal Paraguayo, consisting mainly of young people, has gone from strength to strength.

The Eco Club outside the Bahía Negra radio station, which the club helped to set up.

The group undertakes a variety of activities, including bird surveys with Guyra Paraguay staff, arranging local events and visiting the nearby reserve and biological station. They have a newly-built cultural centre, which houses a small library as well as the radio station the club started; 'Bahía Negra Radio Poty', which broadcasts in the local Guaraní language.

The mission of the Eco Club is "Working for the conservation and sustainable use of biodiversity in the Paraguayan Pantanal through the awareness of local people" and so successful has the Eco Club been in training and improving prospects for the young people of this remote town, that two of the members have recently been recruited to work as National Park Rangers in Defensores del Chaco. This is part of the management for three protected areas in the northern Chaco, under the Tripartite agreement between the World Land Trust, Guyra Paraguay and the Paraguayan Ministry of the Environment.

A representative from WLT's corporate supporters, Swire Pacific Offshore (SPO), visited Bahía Negra in October 2008 and was so impressed by the work and activities of the Eco Club that SPO recently sent the Eco Club a gift package containing educational material.

SPO is working in collaboration with WLT and Guyra Paraguay to explore the potential for a carbon sequestration project in the Chaco-Pantanal and Atlantic Forests of Paraguay. SPO is an international shipping company based in Singapore, providing services to a diverse range of sectors including the oil and gas industries and fisheries protection. The company has a strong CSR policy and has made the decision to become 'carbon neutral'; introducing a comprehensive programme of energy efficiency and a commitment to offset its unavoidable carbon dioxide emissions.

The Eco Club members were very pleased with their gift and sent a hand-written letter of thanks to SPO.