In search of an ancient and remarkable tree, Ecuador SEARCH NEWS

Dr Nigel Simpson is a Trustee of the World Land Trust (WLT) and co-founder of Fundación EcoMinga and Fundación Jocotoco, two of WLT's Ecuadorian project partners. When colleagues at Fundación EcoMinga informed Nigel of a giant ancient tree found on the Candelaria Reserve, he and other members of the Foundation set out on an expedition to find this amazing tree. Here is Nigel's account of the trip.

As most expeditions do, ours began with breakfast. Lou Jost, of Fundación Ecominga, Juan Pablo Reyes who is part time manager for Fundación Ecominga and I were meeting up to start an adventure into the depths of the Candelaria Reserve in search of a spectacular tree which we had only heard about third hand. Juan Pablo is a keen herpetologist and conservationist, and participant in a program to census and protect the globally endangered Mountain Tapir in and around Sangay National Park.

The gorge of the Río Pastaza with exposed lavas from ancient eruptions; a group of children greeted us at the edge of the suspension bridge; Sobralia luerorum named after two distinguished orchidologists.

After breakfast the three of us drove for about fifteen minutes down the valley of the Pastaza, past the hydro-plant, through the tunnels to the village of El Placer, where the Recalde family lives. The Recalde family was the original owner of the Cerro Candelaria Reserve, and three of the younger family members – Luis and Fausto Recalde, and Israel Valencia are now the guardeparques (park guards) for Ecominga and were joining us on our expedition.

We left our truck behind, gathered up our rucksacks and camping gear, and descended the steep side of the gorge of the river to cross the suspension footbridge. Here the water volume is reduced to about a quarter as the rest is underneath in tunnels generating electricity. The sides of the gorge reveal lava flows created by Tungurahua volcano in a very active phase about 300,000 years ago. This particular morning the influence of the volcano was limited to a few deposits of ash on the leaves of bushes along the trail.

It was a three hour walk along a slowly ascending trail through a mixture of orchards, pastures and then secondary forests to our first stop at the wooden cabin which the family uses as a base for farming. Two-metre long plants of the orchid Sobralia luerorum arched over the trail.

A snack for lunch was prepared in the cabin, during a rainy spell, before we continued further along the trail to enter the reserve where temperate cloud forest was predominant. A cable remained stretched across a valley, left over from timber extraction many years ago.

Our team on the trail, and lunch in the cabin.

After walking another hour along the trail (which had been very well constructed by our companions) we reached our campsite in an area of beautiful pristine rainforest in the deep valley of the Río Chinchín Grande. We heard a bird of prey calling from the forest – it was an immature Black and Chestnut Eagle, the same bird which a couple of weeks before Luis had been able to approach and obtain a superb photo. 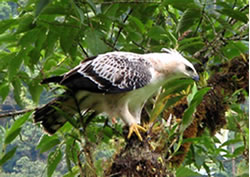 A young Black and Chestnut Eagle by Luis Ricalde.

We also encountered three examples of the new Blakea tree species which Lou had discovered a year earlier and is now named after Sir David Attenborough. Lou and I camped overnight while Juan Pablo returned to Baños to meet a group who were starting the Mountain Tapir census, and the Recalde family returned to their cabin to overnight there.

After putting up our tents, Lou and I climbed up a steep trail above the campsite for about an hour to sample the forest. This trail provides access to the páramo on the summit ridge 1900m above and another two or three more hours hike away. We returned to our tents for a dinner of bread rolls, cheese and salami, nuts and yoghurt and promptly fell sound asleep to the forest's night noises of frogs, drips and falling leaves from the trees, an occasional owl, and the rushing water in the Río Chinchín.

Our campsite in the Cerro Candelaria forest, and views of the Río Chinchín Grande nearby.

Bright and early the next morning we set of on what was the main objective of expedition: to try and find this magnificent tree that we had been told about. Colleagues said it was an ancient 'Cedro' towering above the main canopy of the forest. Our route lay further upstream along the gorge of the Chinchín, but we were unsure of the distance as one source had told us it was a half hour hike and the other had said a good two hours! If is was much more than two hours I doubted my ability to get there and back along the very steep terrain, and then return from the campsite back to the road at El Placer.

The weather was perfect – cool, dry and cloudy – when we set off along the simple track which our guards had cut into the side of the gorge. After an hour of climbing and crossing two stream valleys we had noticed large emergent trees on the mountainside opposite and above us, but we had not encountered anything similar on our side. A large waterfall which we crossed had an Andean Dipper perched halfway up it. A Black-billed Mountain-Toucan and a Highland Motmot called from the canopy, and an unidentified Guan flew away. Then twenty minutes later there it was, unmistakably, about thirty metres in front of us.

Views of the remarkable Cedro tree in Candelaria.

A similar forest giant emerging from the canopy on the opposite side of the valley.

Considering the location – on a steep (greater than 45 degree) slope, very heavy rainfall (about 5 metres a year), and very prone to earth tremors and landslides – it was quite astonishing that the tree could have survived for the several hundred years needed to reach this size. It was over two metres diameter at its base, we measured (with difficulty) about 5.5 metres circumference at chest height, and the height was somewhere between 50 and 70 metres.

It was difficult to get a clear sighting of the top as it broke into multiple branches, and the steep rough terrain and surrounding trees prevented our getting a clear view. The roots at the base were wrapped around a large rock. This may have improved its stability. Usually in this type of forest, the large trees will topple down slope before they reach maturity. We noticed a serious landslide immediately above the tree, containing a couple of fairly large fallen trunks but it stopped short of the mound from which the tree emerged. Trees of this stature are rare in montane cloud forest. Few locations in the Andes have escaped the effects of clearance or selective felling. We also noticed several large Podocarpus sp trees, another genus highly prized for its timber. It was a majestic sight, made all the better by the effort of getting there. 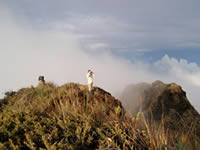 The páramo and summit of Cerro Candelaria – 3,800 metres above sea level.

After many photographs – none of which could do justice to this giant, we returned along the gorge to our camp where Luis and Juan Pablo were awaiting us with a lunch. We then hiked back to El Placer, the weather continuing to be perfect – no burning sun and no rain. En route we met up with Señor Ricalde sr and his daughter at the cabin. They had been planting trees in an old pasture, as part of a reforestation project.

Back in the modern world, a mobile phone call summoned a taxi to return us to Baños. The volcano Tungurahua was now erupting spectacularly about once every 5 to 10 minutes. At dawn the next morning, the indefatigable Juan Pablo would be climbing up to the páramo on Candelaria to begin the census of the Mountain Tapirs.