Symposium on Payments for Ecosystems Services and Fundraising SEARCH NEWS 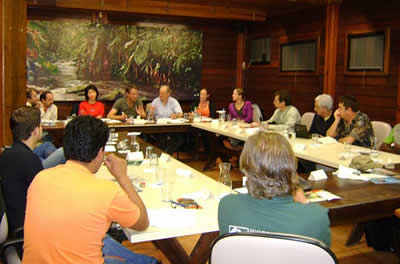 How to make nature reserve bring in an income is a problem confronting many non-government organizations (NGOs), and 'ecosystem services' such as protecting clean water, locking up carbon, herbal remedies are among the benefits a nature reserve can provide. The problem is one of raising the necessary funding from them to protect the reserves.

The third Partners' symposium organised by the International Union for Conservation of Nature National Committee for the Netherlands (IUCN NL) and the World Land Trust (WLT) was held in October actually in the Atlantic Forest in Brazil, and was an inspirational choice of location. WLT project partner Fundação O Boticário hosted the symposium at their Salto Morato Reserve in southern Brazil.

Payments for Ecosystems Services (PES) was the topic suggested by the Partners at the previous symposium held in Belize last year (Land Purchase as an intervention strategy for biodiversity conservation*).

PES aims to assign true economic values to natural habitats. Typically, it maintains a specified ecosystem "service" such as clean water, biodiversity habitat, or carbon sequestration capabilities in exchange for an economic value. PES programmes can provide income for nature reserve management for the NGOs that own and manage IUCN NL and WLT funded wildlife reserves. PES is potentially important in contributing to the sustainability and long-term protection of these reserves.

15 of the project partners of WLT and IUCN NL from 11 different countries, participated in the Symposium, and among subjects discussed was Reducing Emissions from Deforestation and Degradation (REDD), which is high on the Agenda in Copenhagen next month. They also discussed, PES Hydrology, other forms of PES, working with relevant authorities as well as lobbying government authorities to promote PES programmes.

The IUCN NL/WLT joint Symposia acts as a valuable link between the two organisations' projects partners, who benefit from meeting face to face and sharing their experiences. As one of the delegates said:
"I have cut back my participation in most meetings, having spent several years traveling back and forth between Quito and Guayaquil. I finally got burnt out, because most of the meetings were of little or no value to me or the organization that I represent. These symposia are very different, and from the first symposium in Holland, I have always come away with valuable information that has served me in my work and also charged the batteries so to speak, to continue the good work yet another day"
Eric von Horstman,
Fundación Pro-Bosque

These symposia will continue, with the next one being planned for 2011.

*Links to the Proceedings from the 2006 and 2008 symposia can be found here (in both English and Spanish):
https://www.worldlandtrust.org/landpurchase/
(Proceedings from this third symposium will be added when they become available.)