Protecting Lake Natron and its flamingos in Tanzania SEARCH NEWS 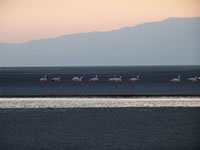 Flamingos at Lake Natron, threatened by the proposed soda extraction development. Click on the image to see a larger version. Photo by hansco used under Creative Commons Licence.

Villagers living around Lake Natron in Tanzania have reaffirmed their pledge to protect 'their' lake from the development of an environmentally destructive soda ash extraction plant on its shores. Lake Natron is a salt lake located in northern Tanzania and the only known breeding ground for 2.5 million endangered Lesser Flamingos (Phoeniconaias minor).

Back in 2007, a multinational company began making plans to develop a soda extraction plant that would use the sodium carbonate in the production of washing powder for export. In 2008, a community delegation from Lake Natron rejected this proposal. In October, the community claimed their stand remains.

World Land Trust partner, The Wildlife Conservation Society of Tanzania (WCST) proposed instead the development of an environmentally-sensitive tourism industry. Lesser Flamingos are very sensitive to disturbance and the implementation of a soda ash extraction plant in the area would seriously threaten their survival. Such a development could wipe out one of the highlights of East Africa's natural heritage and drive the East African Lesser flamingo to extinction.

WCST has called for the support of stakeholders and governments in the development of a small-scale tourism to enable the Natron community generate a sustainable income. Taking advantage of the natural beauty of this region and sensitive use of the lake for tourism will provide income for the local community and ensure the survival of the fragile and beautiful wildlife that it supports.