Food put out for Condors at the Yanacocha Reserve, which is owned and managed by World Land Trust's Ecuadorian partners Fundación Jocotoco, is also benefitting other species such as Puma. 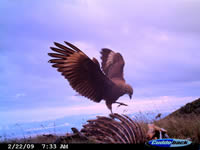 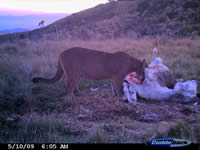 The Andean Condor (Vultur gryphus) is the National Bird of Ecuador and is one of the largest flying birds in the world with a wingspan of up to 3.2m. This species is declining at an alarming rate and their survival is not helped by the fact that they mate for life and have a low reproductive rate.

The Condor is currently listed as Near Threatened by the IUCN Red List and over the last 15 years numbers in Ecuador appear to have halved from 50-60 pairs to perhaps 23-30 pairs throughout the whole country. As well as the factors mentioned above, the main causes of their decline are persecution by humans, habitat fragmentation and lack of food.

Condors visiting the Yanacocha Reserve on Pichincha Volcano are part of the group which ranges between the three great volcanoes Cayambe, Antisana, and Cotopaxi. They are being fed at a safe and protected site at over 4000m in the reserve, at which an automatic camera trap is providing some vivid images. Resulting photographs taken by the cameras have shown that these feeding sites are also being visited by other predators on the reserve.

Occasionally the local indigenous community at Yanacocha village are able to provide carrion for the feeding tables. The supply of suitable carrion for vultures is crucial for their survival in the modern world. A recent European law requiring that all dead cattle etc must be removed and buried has had a devastating effect on Griffon and other Vulture populations in Europe, and now thankfully has been rescinded in highland areas such as the Pyrenees where carrion was a necessary food source.

Camera trap pictures show the Puma, Andean Wolf and the Carunculated Caracara (a member of the falcon family) are also benefiting from the supplementary feeding. Although the Puma is classed as of Least Concern by the IUCN Red List and is one of the most adaptable wide ranging terrestrial species, many populations are declining due to habitat loss and persecution. World Land Trust is pleased to see Yanacocha protecting the habitat of Pumas and it is wonderful news that they are taking advantage of the feeding stations.

The Yanacocha reserve was originally created to protect the habitat of the Black-breasted Puffleg, a critically endangered hummingbird, now adopted as the emblem of Quito. However, the presence of large predators on the reserve demonstrates just how important it is to save large areas of natural habitat in order to conserve the whole biodiversity of a region.

To learn more about the Yanacocha Reserve and the other areas supported by the conservation project in Ecuador, and to help save more wildlife habitats in the project area, see Help Save Rainforests in Ecuador.