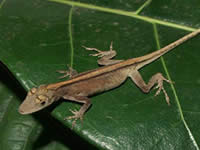 A research team based at WLT project partner's reserve REGUA have discovered the presence of a new species in the area. The Slender Anole (Anolis fuscoauratus), a forest dwelling lizard, was discovered in a 133 ha forest fragment, partly owed by REGUA.

The species has a wide distribution in South America but had previously not been well documented in the Atlantic Rainforest and its range had not been confirmed to extend to Rio State. This finding brings the known reptile species for the state to 131 and adds a second Anole species to the list.

Find out more about REGUA and WLT's work in Brazil »