Deforestation in Paraguay: Over 1500 football pitches lost a day in the Chaco SEARCH NEWS 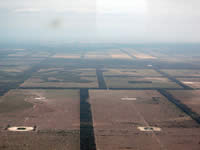 The extent of the deforestation in the Paraguayan Chaco is equivalent to over 1500 football pitches a day, according to World Land Trust (WLT) partners Guyra Paraguay. They have used satellite imagery to measure deforestation in this dry savannah habitat and results revealed that the deforestation rate has already exceeded the devastating 228,000 hectares of irreplaceable habitat that was lost last year.

Aerial photo showing deforestation in the Chaco. Photo © Guyra Paraguay. Click on the image to see a larger version. 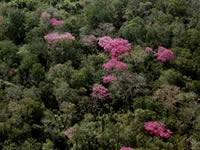 The Chaco forest is being lost at an alarming rate, but some still remains such as this patch, which includes some of Paraguay's beautiful national tree, the Lapacho. Click on the image to see a larger version. 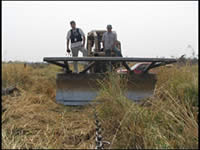 Dr José Luis Casaccia has been involved in confiscating bulldozers which have been illegally smuggled from Brazil in order to deforest the Chaco in Paraguay. Photo © José Luis Casaccia. Click on the image to see a larger version.

By the end of October this year, some 265,000 hectares have already been lost and Guyra Paraguay predicts that the 2009 figure will exceed 300,000 hectares by the end of the year. During a critical month of deforestation from April to May this year, the rate soared to 3190 acres (1291 ha) (which is over 1500 football pitches) lost every day. The main reason for this drastic forest clearance is to make way for agricultural development, in particular for cattle grazing. Although the Chaco does have some large protected areas, these are becoming increasingly fragmented and turning into forest islands, serving as key refuges for the incredible wealth local wildlife. Unfortunately, because of lack of funds these areas are not always well managed and therefore are at risk of being degraded. For example, until recently there was just one park guard, with no vehicle, to protect over nearly 2million acres of Defensores del Chaco National Park.

What WLT and Guyra Paraguay are doing to help

The World Land Trust is raising funds for Guyra Paraguay to purchase and protect threatened habitat in three distinct areas of Paraguay; the Dry Chaco, the Chaco-Pantanal and the Atlantic Rainforest. In addition to this commitment WLT recognises that Paraguay already has some key protected areas, such as Defensores del Chaco National Park, that require just minimal funding to effectively protect them and all the wildlife they safeguarding. Under the Tri-partite agreement with Guyra Paraguay and the Ministry of the Environment (SEAM), WLT are supporting management costs of three protected areas in the northern Chaco. This support has already been instrumental in the appointment of more Park Guards at Defensores del Chaco. Seven parkguards are now employed and a vehicle with fuel has also been supplied to help protect this vast area. Raising awareness of the largely unknown issue of deforestation in the remote Paraguayan Chaco is critical in gaining national and international support. Last week WLT supported Dr Alberto Yanoksy (Executive Director of Guyra Paraguay) and Dr José Luis Casaccia (Environmental prosecutor for the Attorney General's office and ex-Minister of the Environment) in a trip to the UK. They gave presentations at the University of East Anglia, the Study for the Institute of the Americas and the House of Commons (details of which will be available on the WLT website shortly) and press interviews have led to publicity about the deforestation taking place. Dr Yanoksy and Dr. Cassacia are urging the world community to acknowledge this huge environmental loss and assist them in saving this unique environment. Their final message was that if no action is taken then according to figures resulting from monitoring deforestation, the prediction is that in less than 20 years the area will be reduced to desert, with all the species having been lost, with the exception of the reserve areas already created.

How you can help:

To help protect Paraguay's wildlife, you can save an acre of Paraguayan wilderness for just £50. Make a donation now (opens in new window) to save these important wildlife habitats

To read more on the critical issue of deforestation in the Paraguayn Chaco see the following recent articles: