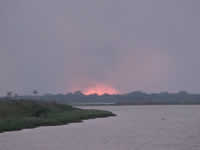 The fire in the Chaco-Pantanal Reserve seen from Río Negro. Photo: © Guyra Paraguay 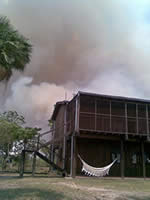 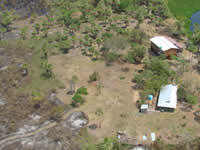 A recent fire in Paraguay gave serious cause for concern as it came perilously close to the Three Giants Biological Station.

Situated by the river (Río Negro) in the north-east of Paraguay, the Three Giants Biological Station was funded by World Land Trust (WLT) and is located on the Chaco-Pantanal Reserve, owned and managed by WLT Project Partner Guyra Paraguay.

It is believed that the fire was started by poachers who often use this method to flush out wildlife.

The fire spread rapidly and became out of control, probably as a result of strong wind and the recent dry weather in the area. Fortunately it was brought under control and extinguished before it reached the Three Giants Biological Research Station thanks to the efforts of the Airforce, Naval forces, and the Ministry of the Environment.

The amount of damage has not yet been fully estimated but Guyra Paraguay are currently working in the worst affected areas on urgent damage limitation and measures to help the habitat recover as quickly as possible.

Despite the fact that the Chaco Pantanal ecosystem is adapted to fire, according to Guyra Paraguay this fire was particularly destructive and investigations are being undertaken to establish what possible impacts it may have had on the fauna and flora in the reserve.

Learn more about the Chaco-Pantanal Reserve »