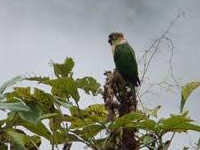 Top: Adult White-breasted Parakeet; Middle: Two of its chicks in a nest box; Above: Researcher Mery Juiña with two Golden-plumed Parakeet chicks. Click on the images to see larger versions.

During a monitoring visit in April, Mery Juiña, researcher at the reserve confirmed that both species of parrots were nesting successfully in the nest boxes, put up specifically for White-breasted Parakeets in 2007 and for Golden-plumed Parakeets in 2008.

The parrots started by using the boxes for roosting, but more recent visits have established that some of the boxes are now being used as nest sites.

The Golden-plumed Parakeets are doing particularly well, with 10 out of 18 artificial nest boxes containing eggs or chicks when monitored.

That the artificial nest boxes are being used is great news as both species of parakeets are considered endangered and at risk of extinction both in Ecuador and worldwide.

Tapichalaca Reserve is owned and managed by World Land Trust partners Fundación Jocotoco and supported by the Trust through the Tropical Forest Project.