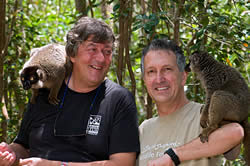 Mark Carwardine, a former World Land Trust (WLT) Trustee and keen supporter, worked with the late, great, Douglas Adams on a series called Last Chance to See, some twenty years ago. Their journeys took them as far afield as Zaire in search of the Northern White Rhino, China in search of the Yangtze River Dolphin and the Amazon in search of the Manatee. and the book of the series was published in 1990 as a companion to the BBC radio series. In 2001 Mark and Douglas were discussing the possibility of new adventures, when sadly Douglas suffered a heart attack and died that year.

Stephen Fry was a close friend of Douglas Adams, and when Douglas and Mark spent their year travelling the world, Stephen lived in Douglas' house, and recalls "taking urgent phone calls to send maps and lenses to faraway places." It seemed a natural evolution that Stephen should take over where Douglas left off and in 2008-09, exactly 20 years after the original journey, Stephen and Mark found themselves heading off to in search of those same animals, to look at how they had fared over the past two decades.

The first episode of Last Chance to See will be broadcast on BBC Two, 6 September at 8pm, with Mark and Stephen going back to the Amazon in search of the Amazonian manatee.

Just before the last episode of Last Chance to See is broadcast WLT brings you Mark live in Bristol, talking about his adventures. Tickets are now on sale from St George's, Bristol