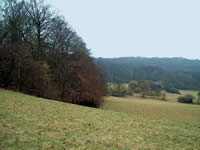 The Kites Hill Reserve encompasses both woodland and fallow grasslands, some of which are now being reforested. (Click the image to see a larger version.) 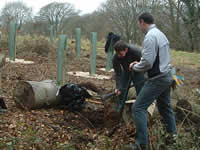 BTCV volunteers remove a fallen beech tree from the site of the woodland extension.

A working party was held at Kites Hill in late February to extend the SSSI Beech woodland which borders this beautiful reserve in Gloucestershire.

Donning work gear, the World Land Trust (WLT) and the British Trust for Conservation Volunteers (BTCV) planted mixed broadleaved trees during a milder spell that followed the snowfall and frosts of January which had delayed the working party. In total 110 trees were planted in two areas of the site.

Further activities at Kites Hill that are planned for this year include the continued coppicing of ancient hazel on the site and the excavation of a pond to enhance the reserve's range of aquatic habitats.

Kites Hill, located in the Cotswolds Area of Outstanding Natural Beauty, was originally used as farmland. The site was donated to the World Land Trust, designated a nature reserve and is now protected for the benefit of wildlife.