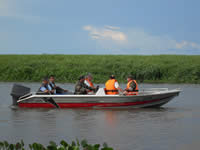 On 7 February, the President of Paraguay, Fernando Lugo, visited the Pantanal in north-east Paraguay, and specifically Guyra Paraguay's Chaco-Pantanal Reserve, which was saved largely as a result of donations from World Land Trust (WLT) supporters. While in the reserve he stopped off for a few hours at the Giants Biological Field Station (again, funded by a supporter of WLT) which sits on the bank of the Río Negro (Black River).

Fernando Lugo (centre) in the Pantanal on his way to the Three Giants Biological Station. His group is led by Alberto Yanosky and Oscar Rhodes from Guyra Paraguay. 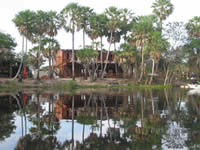 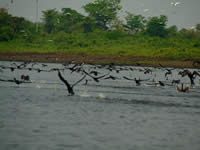 The Pantanal is a haven for wildlife, and particularly birds that come to feed on the quantities of fish in the Río Negro. (Click the image to see a larger version.)

Despite rainy weather, the President was able to see firsthand, the lush green vegetation on the banks of the river which is a mecca for wildlife, and also observe many of the bird species which flock to this secluded wildlife paradise. Birds of the region include an abundance of Wood Storks, White Storks and Anhingas, as well as Rufescent Tiger-Herons, Black-crowned Night Herons and other herons.

Guyra Paraguay's team, led by its Director, Alberto Yanosky, and Co-ordinator, Oscar Rhodes, had an opportunity to talk with the President about Guyra Paraguay's achievements over the past ten years, in its bid to save this important area of high biodiversity in perpetuity for conservation.

The President stressed the importance of the work Guyra Paraguay was doing and expressed a wish to return to spend more time in the region. After his visit he said that this was an area of great environmental importance which deserves to be recognized more widely.

Travel Republic, corporate supporters of WLT, have been raising funds for land purchase in Paraguay since June 2006, by making donations on behalf of every client booking a flight. By the end of 2008 a grand total of £75,842 had been raised which was transferred to Guyra Paraguay for the purchase of 'Property 9' in the Chaco-Pantanal Reserve. Travel Republic have confirmed their commitment for 2009 and requested that, as previously, the funds will be used for land purchase and protection in the Pantanal, working through Guyra Paraguay. WLT and Guyra Paraguay thank Travel Republic for this wonderful support for conservation.