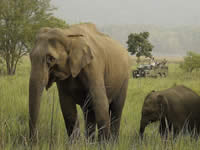 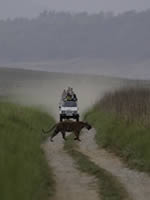 Would you like to see some of the areas where the World Land Trust and its partners are working? Then join this tour, led by long-term WLT supporter, Dan Freeman. Photos: © Aditya Singh

In the Footsteps of Jim Corbett

This proposed tour (led by wildlife film-producer Dan Freeman who has made his own film on man-eating tigers) will follow 'In the Footsteps of Jim Corbett', taking in three of his hunts, his home towns of Khaladungi and Nainital and Corbett National Park – where two of his hunts took place – during a two-week journey that will bring alive the place and the memory of one of the world's most courageous and sympathetic people.

Jim Corbett was a pioneering conservationist in India. He loved people and tigers and he understood, better than anyone, why tigers became man-eaters and the misery they caused to village life in the foothills of the Himalayas one hundred years ago. He wrote the most incredible accounts of how he saved people from tigers, of how he tracked these formidable big cats in their own territories and finally killed them. He found that they were always suffering from injury or old age, no longer able to hunt their more normal forest prey and turning to cattle and people instead. In his books – the most famous of which is The Man-eaters of Kumaon, Jim Corbett described vividly and dramatically, but unsensationally, the unfolding stories of his hunts. Much of what he described then remains today.

If you would like to know more about this tour, please refer to the Discovery Initiatives website, following the country (India) or animal (tiger) link. Rupert Cue, the company's Country Director for India, will be pleased to send you a detailed itinerary.