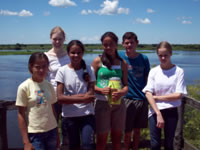 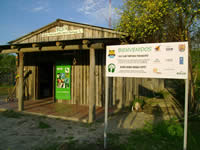 Top: A few members of the Pantanal EcoClub, on the banks of the Río Negro. They are joined by Tracie Long, a former WLT/UEA Diploma student, back left. Above: The radio station (See a larger image of the radio station.)

In the Pantanal, Guyra Paraguay (partners of the World Land Trust) have been able to build on the work of the EcoClub Pantanal Paraguay, a group formed by young people from the community of Bahía Negra. With Guyra’s help the EcoClub were successful in its grant application to the World Bank and were awarded $10,000 to set up the area’s first radio station, staffed and run entirely by local conservationists, and broadcasting in Guaraní. “When we first got here, there was no government presence, and no communications, except radio stations broadcasting from Brazil”, explains Alberto Yanosky, Executive Director of Guyra. “There was no access to the Pantanal: we brought the first boat to the area. Now we’re helping provide economic opportunities through sustainable tourism that will enable young people to stay in the are to earn a living – before, they had to leave to find work.”

When WLT Trustee Rohini Finch, visited the Pantanal, in July 2006, she was so impressed by the commitment and enthusiasm of the young people running the EcoClub, that she promised to match any funds they raised before her next visit. Unfortunately Rohini was unable to join the group from WLT that went out to Paraguay for the official opening of The Three Giants Biological Station in March 2008, but she was represented by her husband, Bob Finch and daughter, Jo Finch. The EcoClub were proud of the US$420 they had raised which is a wonderful amount considering this is a tiny community with very little outside communications. Jo was pleased to be able to hand over Rohini’s pledged matched funding.

In the words of Saúl Arias, Secretary and Treasurer of the Pantanal Eco Club, “I participated in the radio broadcasts which made it possible for me to become an operator on the Bahía Negra Poty radio. Every day I wake up very early to help my mother before going to school since I belong to a large family of 8 brothers and sisters. Since I was nine I have been going to the Club, first accompanied by my sister Liz since she was not allowed to go alone to the meetings and environmental camps that the people from Guyra Paraguya organized, and then on my own. It was very revolutionary for our parents, especially because we were “mobilizing and organizing ourselves”. Since belonging to the club I can confirm that we have done a lot for our community and spread environmental awareness but we still need work to become leaders of the region. The president of our group is a woman whom I admire for all the achievements in what is, sometimes, a chauvinistic community. Nilsa Frutos is also from Bahía Negra and we meet with her once a week to plan our social and environmental activities, although, of course, we see each other every day on our radio programs. The radio really helps us spread the message across our community at Bahía Negra.” 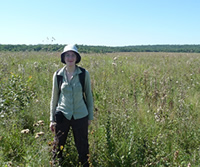 Butterflies in the rainforest: Student braves record-breaking storms to do research in Paraguay 07/04/2010

In March this year, as part of the field work for her Graduate Diploma in Conservation Administration, Alison Lewis went …