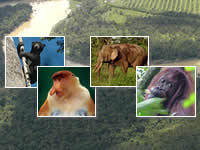 The area in Sabah, Malaysian Borneo, the Cambridge Rainforest Appeal is raising funds to save, with some of the species that rely on this forest for their survival. Photos: KOCP-Hutan, LEAP, Siew Te Wong, WLT. 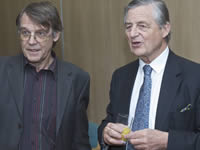 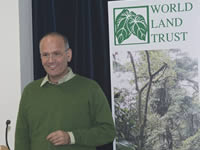 The Cambridge Rainforest Appeal was launched by Marshall of Cambridge at their Airport Headquarters, on November 21st with the aim of encouraging companies and individuals in the Cambridge area to respond generously to the World Land Trust's Orang-utan Appeal.

The response to the appeal was terrific with over £31,000 being raised on the night. Guest speakers at the launch included Doug Richard, former "Dragon" from the BBC's Dragons Den, Michael Marshall, Chairman of the Marshall Group of Companies and John Burton, CEO of the World Land Trust (WLT).

In addition WLT supporter and professional photographer Chris Perrett, who runs Naturesart, kindly joined us and raised funds through the sale of his stunning Orang-utan photographs, which he took during a recent trip to Sabah, with his wife, Sue.

The total raised to date by the CRA has topped £170,000 for the Orang-utan Appeal – thank you to everyone who has contributed so far.

To support the Orang-utan Appeal, go to WLT's fundraising page on www.justgiving.com.