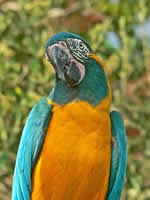 In Bolivia, Conservation organization Asociación Armonía, with the support of American Bird Conservancy and WLT-US, has created the world's first protected area for the Blue-throated Macaw, a critically endangered species with a population estimated at just 300 birds. An 8,785 acre ranch in the grasslands of northern Bolivia has been purchased to create the Barba Azul Nature Reserve, a breeding site for the Blue-throated Macaws. The reserve, with its grassland habitat, will also protect several species endemic to this area of Bolivia.

In Colombia WLT-US is helping Fundación ProAves to expand two protected areas in the Chocó and Eastern Andes regions as well as a new reserve protecting an important watershed on the eastern foothills of the Andes.

To learn more about these projects and how to support them, visit the WLT-US website: