Around Paraguay without a fridge: Tony Hawks brings the Pantanal wetlands and Dry Chaco to London SEARCH NEWS 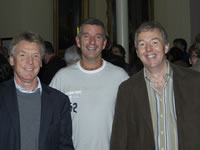 Author and comedian, Tony Hawks, might be better known for trudging around Ireland with a Fridge, but what most people don’t know is that he trudged around Paraguay without a Fridge! This was in March when he joined a group of World Land Trust (WLT) donors to the Paraguay project on a fact finding trip to the Pantanal wetlands and Dry Chaco. On 13 November Tony amused his audience at the Royal Geographical Society with his witty and warm observations of the country, its people and its wildlife, and was joined by Alberto Yanosky, Director of WLT project partners, Guyra Paraguay, who gave further insight into the conservation challenges in Paraguay.

Of the Dry Chaco, Sir David Attenborough comments:
“This is one of the last great wilderness areas left in the world, and it is hugely encouraging that much of it is still as it was when I was there half a century ago. It is vital that we save the incredible biodiversity of the Dry Chaco and I think it is wonderful the the World Land Trust has been able to play such an important role in saving it for future generations.”

More about the visit to Paraguay

In March this year Tony Hawks accompanied a group of World Land Trust supporters on a pioneering site visit to the Pantanal Wetlands and Dry Chaco of Paraguay. On the last day of this visit the Government of Paraguay announced an innovative shared-management agreement with Guyra Paraguay in association with the World Land Trust, to conserve over 2.5-million acres of threatened chaco habitat in Paraguay. In making the announcement the Minister of the Environment, Carlos Antonio Lopez-Doze, supported by the Minister of Tourism, Liz Cramer, stated that the support of the World Land Trust and its donors in recognising the international importance of Paraguay’s biodiversity, was a key factor in this momentous decision.

A tri-partite Agreement between the Ministry of the Environment, Guyra Paraguay and the World Land Trust has now been signed giving Guyra Paraguay the responsibility for the management of three national parks within the Northern Chaco Biosphere Reserve, on behalf of the people of Paraguay. The role of the World Land Trust is to co-ordinate international fundraising to support the conservation of the region, as well as providing technical assistance on carbon sequestration and ‘avoided deforestation’ projects which are all part of the overall vision for the parks.