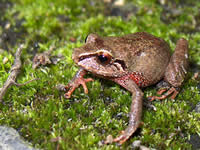 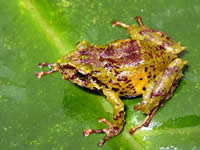 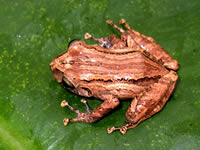 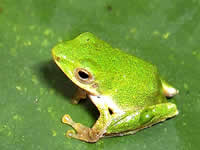 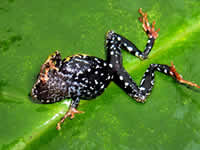 Top: The four new species of frogs discovered in the EcoMinga reserves. Above: The colourful underside of the frog second from the top. Photos by Juan Pablo Reyes (Click on the images to see larger versions.)

Herpetologists from the Museo Ecuatoriano de Ciencias Naturales (Ecuadorian Museum of Natural Sciences) have been surveying EcoMinga's reserves and have discovered four apparently new species of frogs in and around the reserves. They estimate that the total number of frog species in the Cerro Candelaria Reserve (EcoMinga's largest reserve, bought with major individual and corporate donations to the World Land Trust) is around forty. This is good news in a world where most news about frogs is very depressing.

The herpetologists were especially thrilled to find a surviving population of a harlequin frog (Atelopus palmatus) that was thought to be extinct; this was found near EcoMinga's Rio Zuñac reserve. Their investigations of EcoMinga's reserves were funded by WLT trustee Nigel Simpson.

Andrew Smiley from WLT visited the Candelaria Reserve in May to investigate the possibility of involving the reserve's neighbours in organic shade-grown coffee, which can be grown under a canopy of native trees. If agreement can be reached the coffee would be sold directly to Puro Coffee for their premium organic "bird-friendly" brands. This would improve the lives of local farmers and result in reforestation of current pasturelands.

Meanwhile, reforestation continues on former pastures along the edge of the Cerro Candelaria reserve. EcoMinga personnel are rapidly learning how to reconstruct a natural forest of high diversity in these former pastures. Over one thousand trees have now been planted.