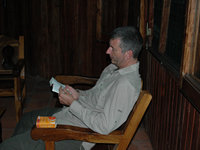 Tony tries to get to grips with Spanish at the Three Giants Lodge. 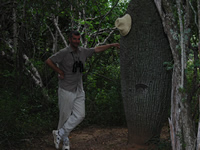 Tony hangs his hat up on a Palo Borracho ('drunken') tree in the Dry Chaco. 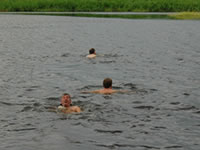 Tony, Bob Finch and John Burton swim to Bolivia. This might sound like quite a challenge but Bolivia is on the opposite bank to the Three Giants Lodge.

Multi-talented comedian Tony Hawks is well-known for his appearance on radio panel games such as I'm Sorry I Haven't a Clue, Just a Minute, and The News Quiz. On television he has been seen in Have I got News for You? and Grumpy Old Men. He is also a celebrated author, and his first book, Round Ireland with a Fridge, has sold over 500,000 copies. His other books include Playing the Moldovans at Tennis, One Hit Wonderland and A Piano in the Pyrenees, copies of which he signed on the evening.

Tony has been a supporter of WLT for many years and assigns the Public Lending Rights in all his books to the WLT Green Ink project; so far this has raised over £5,000.

In March, Tony joined John and Vivien Burton and a group of donors, on a fact-finding trip to the wetlands and deserts of Paraguay. He stayed at the Three Giants Lodge in the Pantanal, and saw the Dry Chaco wilderness for himself and, as well as Paraguay's wild places Tony thoroughly enjoyed the warmth and friendliness of the Paraguayan people. He came back inspired to help further and we are delighted that he has agreed to do other public events for us in the future.

Tony amused everyone at The Cut with his witty repartee, skilful tricks and guitar interludes. He was joined by Alberto Yanosky, Executive Director of Guyra Paraguay who spoke eloquently and gave an illustrated presentation on Guyra's work in the Dry Chaco Reserve, and Alberto Pino and Christoval Pederson, formerly of Los Paraguayos, played traditional Paraguayan music on harp and guitar, and talked about their country's music.

Tickets were sold out well in advance of the evening, with queues for returns, and we are looking forward to Tony's return to The Cut. Meanwhile, keep a look out for another WLT event with Tony at the Royal Geographical Society in London, on November 13th (more details later).