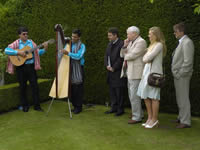 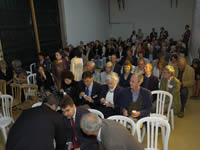 The signing of the cermonial draft agreement. 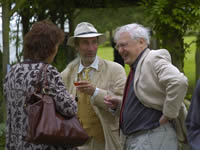 Simon and Cindy Barnes chat with Sir David. WLT would also like to thank Simon for his inspirational features on the project in The Times. 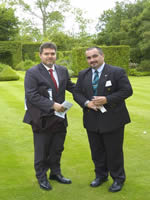 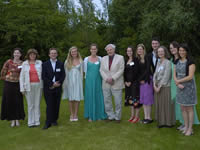 Thanks to all WLT staff who helped make the event such a success. 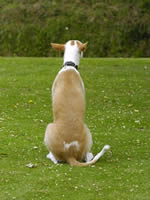 Lara von Preussen makes sure the last person has left and is pleased to have her garden back to herself.

The Trust's third Rose Garden Reception was perhaps the most spectacular to date and, once again, we are indebted to Prince Andrew and Princess Alexandra von Preussen, who welcomed us with huge generosity into their wonderful Suffolk gardens. They allowed us to take over for the evening with a marquee, food and drink and talks in the Great Barn.

Guests at this year's event witnessed the signing of an historic document towards the protection of 2.5 million hectares of some of the wildest place left on earth, the Dry Chaco. As supporters will know, WLT has been working with partners, Guyra Paraguay for the past three years, and has already funded land purchase at Campo Iris, in the Dry Chaco, as well as Pantanal Wetlands and Atlantic Rainforest.

We were honoured to welcome Sir David Attenborough to the Reception, and he spoke of his love for Paraguay resulting from his filming trips to Paraguay fifty years ago for the Zoo Quest programmes. He said: "This is one of the last great wilderness areas left in the world, and it is hugely encouraging that much of it is still as it was when I was there half a century ago." We also showed some archive clips from those Zoo Quest programmes, and although Sir David voiced his embarrassment and hadn't been keen that we showed them, the audience was enthralled. One particular guest emailed afterwards saying: "For what it's worth, I thought that the black and white clips of Sir David's assignment in Paraguay were far better than much of today's television – sincere, simple and effective. Thank you for letting showing us." And we know that the other guests were in agreement.

We were also joined Dr Jerry Bertrand, WLT's President and the Charges de Affairs at the Paraguayan Embassy in the UK, Dr. Jose Gorostiaga. Alberto Yanosky, Executive Director of Guyra Paraguay, gave an illustrated presentation on Guyra and the Dry Chaco Reserve and we showed a video message, sent over specially from the current Paraguayan Minister of Environment, Jose L. Casaccia, in which he said: "Our great Chaco still remains as 50 years ago, as one of the great natural boundaries, not only of South America, but of the entire world. It is a place where nature expresses itself in such a way that captivates all those that visit the area and learn to appreciate the wonders of its biodiversity. What we are doing today, signing this agreement, is of historical value for Paraguay."

The climax of the evening was the signing of the celebratory draft of the shared agreement between the Guyra Paraguay, the Paraguayan Government and World Land Trust to manage three national parks within the Dry Chaco Biosphere Reserve.

We were serenaded by the evocativel music of Alberto Pino and Christoval Pederson, formerly of Los Paraguayos, who played traditional Paraguayan music on harp and guitar.

As well as everyone mentioned above we also like to thank our sponsors, Alder Tree, a Suffolk company who provided wonderful ice cream for everyone and Brandstand, who brought samples of their new range of fantastic Organic Meltdown chocolate, soon to be launched in the UK. We would also like to give special thanks to Nikwax who, not only sponsored the event itself, but also brought samples of their new product SkitoStop – a sunscreen and DEET-free insect repellent which is raising funds for WLT projects. Lastly, thanks to Charles Robinson who took photographs and video footage of the evening, and London's environmentally taxi company, ecoigo who provided transport for Sir David too and from the event.