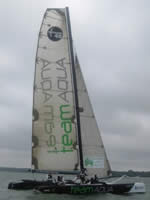 The professional sailing team, Team Aqua, who compete internationally at a top level, have decided to do their bit to promote ecological sustainability by hoisting WLT sails throughout their 2008 campaign. The objective is to promote the WLT as the team continues to strive successfully in high profile competitions in wealthy destinations across the world.

Chris Bake, who supports the WLT in other ways also, is the owner of Team Aqua, and he hopes that by having the WLT logo on their sails while they take part in some of the most competitive sailing leagues "it will give good visibility to [the WLT]. We are true sportsmen and we want to obtain good results: but our goal is also to promote ecological sustainability around the world and raise funds for the WLT".

The WLT sails were displayed for the first time on 28th June 2008 in Cowes, Isle of Wight in one of the largest and most famous Yachting races known as the Round the Island Race. Nearly 1,600 boats competed over the 50 mile course around the Isle of Wight in an event which attracted some of the leading names in the sailing world. WLT congratulates Team Aqua who came third in the race overall, and thank them for all their help.

In addition to helping raise awareness and interest in the WLT around the world, Team Aqua have also ensured that their sailing campaign for 2008 is carbon neutral and have Carbon Balanced through WLT. This means that, as well as displaying the WLT logo, they are also entitled to add the Carbon Balanced logo also. We hope that other sailing teams follow their lead.

Check out Team Aqua's website for more information on their campaign and events www.teamaqua.org