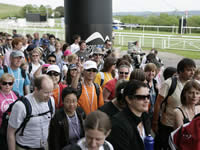 May 10th was a warm and sunny day and couldn't have been better for the Justwalk fundraisers who took part in a sponsored walk across the South Downs. Over 400 walkers took part, covering a total of 12,540 km. The World Land Trust had four participating fundraisers who, between them, managed to raise over £3,700 for WLT (plus associated Gift Aid) – enough to save 75 acres of threatened habitat.

So how did they do it? First, they used the online fundraising site, www.justgiving.com, which we recommend as a safe and effective way of collecting donations for a fundraising venture of this kind. Secondly, two of the walkers, Ben Beaton and Maria Fuhrmann, pulled out all the stops and managed to double their total by getting matching funding from Ben's place of work.

This is what Ben says:
We hiked a fairly demanding (for us) 20km route through the spectacular South Downs. There was also a 60km route for those hardy 'soles' out there! The event was extremely enjoyable and very well organised, offering a fantastic opportunity to not only enjoy a long walk in beautiful surroundings but also to raise money for your chosen charity. We would encourage anyone wishing to raise sponsorship money for the World Land Trust to take part in this event in 2009!

And if you feel inspired you can join them on their walk next year which is planned for Saturday 9th May 2009. There are walks for everyone, with routes to choose from between 10km and 60km long, so take a look at www.just-walk.co.uk/theEvent.asp – we hope you will join in and raise funds for WLT projects.