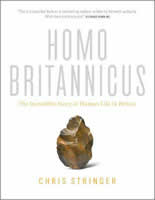 Congratulations to author Chris Stringer who has recently won the 2008 Kistler Book Award for his 2006 book Homo britannicus: The Incredible Story of Human Life in Britain. The Walter P. Kistler Book Award recognises authors of science-based books that significantly increase the knowledge and understanding of the public regarding subjects that will shape the future of our species.

Dr Stringer is Britain's foremost expert on human origins and is a palaeontologist at London's Natural History Museum (where many WLT supporters work, or have worked). His book looks at the dramatic battle for survival ancient Britons had, hundreds of thousands of years ago, as climate change brought about huge changes in the environment. Dr Stringer has contributed to discoveries including the setting of the date for when humans first arrived in what is now Britain to at least 200,000 years earlier than previously thought. Britain has had some of the most extreme changes of environment, all affecting plants and animals in recent Earth history, and part of his work has been to look at how ancient people coped with climate change: something that is becoming more relevant day by day.

Dr Stringer has chosen donate the US$10,000 prize money to the World Land Trust for purchase and protection of tropical forests in Ecuador and it will be used to fund a portion of the Cerro Candelaria reserve in Cental Ecuador, working with Fundación Ecominga. Dr Stringer is also donating the Public Lending Rights in his books to the Trust's Green Ink project. We thank him for this generous commitment to helping the WLT save threatened forests and their biodiversity.