BIAZA Boom: £50,000 towards land purchase in Brazil from zoos in the UK SEARCH NEWS 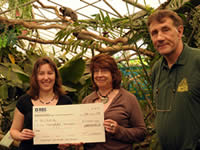 BIAZA is the British and Irish Association of Zoos and Aquariums, and a group of its accredited members are raising funds over 3 years for the purchase of the BIAZA Reserve, in the Atlantic rainforest of Brazil, working with REGUA. The land purchase will extend the reach of the reserve towards the Rio de Janeiro Primatology Centre and create a continuous belt of protected Atlantic rainforest. The target figure for the three-year period, which ends in December 2009, is £266,000 and WLT has recently received the amount raised during the first year (2007) of £50,000.

So far 22 zoos and private members have pledged support and fundraising has already topped £125,000. One participating zoo, Shepreth Wildlife Park has pledged £2,000 a year towards the project and WLT's Education, Training & Outreach Officer, Kelly Jacobs, recently visited them to accept their first year donation. She met with Terry Willers, Director of Shepreth, and was accompanied by Miranda Stevenson, the Director of BIAZA.