Paraguayan government to conserve over 2.5-million acres thanks to WLT donors SEARCH NEWS 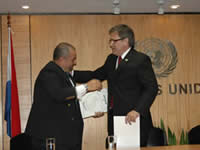 John Burton, WLT CEO (and Alberto Yanosky) speaking at the meeting when the Minister of the Environment announced the co-management agreement.

Aerial photo of the Dry Chaco, showing extensive soil erosion (light brown patches) where the vegetation has been degraded.

WLT is currently funding the purchase of three very different habitats in Paraguay: Dry Chaco (Campo Iris), the Chaco-Pantanal Reserve and Atlantic Forest (San Rafael). Each is unique and all are threatened, primarily by the spread of agriculture, and in particular the growing market for biofuels and soya.

Even the Dry Chaco, a seemingly impenetrable habitat, isn't safe as a new dry-adapted variety of soy has been developed and trials are already taking place in the Chaco. But there is good news…

In March the Government of Paraguay signed an innovative co-management agreement which will conserve over 2.5-million acres of threatened habitat in Paraguay. This initial agreement is with the WLT's partners, Guyra Paraguay and in making the announcement, the Minister of the Environment, Carlos Antonio Lopez-Doze, supported by the Minister of Tourism, Liz Cramer, stated that the support of the World Land Trust and its donors in recognising the international importance of Paraguay's biodiversity, was a key factor in this momentous decision.

Over the next few months a formal tri-party Agreement between the Ministry of the Environment, Guyra Paraguay and the World Land Trust will be drawn up and signed, giving Guyra Paraguay the responsibility for the management of three national parks within the Northern Chaco Biosphere Reserve, as well as the Atlantic Rainforest of San Rafael, on behalf of the people of Paraguay.

The role of the WLT will be to co-ordinate international fundraising to support the conservation of the region, as well as providing technical assistance on carbon sequestration and 'avoided deforestation' projects which is all part of the overall vision for the Reserve.

Message from Sir David Attenborough congratulating the Government of Paraguay on its decision to protect the Dry Chaco:

"This is one of the last great wilderness areas left in the world, and it is hugely encouraging that much of it is still as it was when I was there half a century ago. The Government of Paraguay is to be congratulated on recognising the international importance of its wild heritage. Not only is it vital to save the incredible biodiversity of the region but part of the land is also home to people who still live in the forests largely unaffected by the outside world. I think it is wonderful that the World Land Trust has been able to play such an important role in saving it for future generations and I hope the rest of the world will respond generously and support WLT as it raises funds for the long term protection of this vast wildlife paradise."
Sir David Attenborough, Patron, World Land Trust