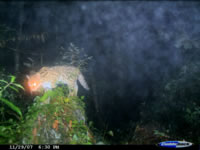 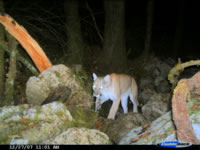 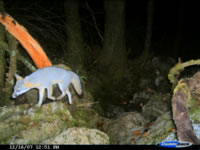 Ocelot, Puma, Gray Fox and Javelinas. (Click on the images to see larger versions.) Camera traps put up by Roberto Pedraza, along with Ben and Alina Lenth.

Roberto from Grupo Ecológico Sierra Gorda in Mexico has been busy collecting camera trap images from the Sierra Gorda Biosphere Reserve and surrounding areas and recently wrote to us:

"I'm attaching some of our latest cat photos, an ocelot and a beautiful puma. The ocelot pic happened in one of the private nature reserves properties of one of our local partners, Asociacion Filantropica Cummins, that is under our management and the puma in one of the core areas of the reserve, in a beautiful old growth cloud forest of firs, white cedars and yews, it is so rewarding to know they are still present and doing fine."

"I'm also attaching a nice gray fox photo of the same camera and javelinas* (the local pizzas for jaguar and pumas!) from another site."

They are all great images, but WLT's favourite has to be this extreme close up of a jaguar Roberto sent us a couple of weeks later, captured by the camera in the Arenitas area: 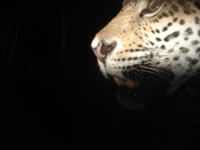 And a day in the field doesn't just result in amazing camera trap images: here are some 'live' discoveries Roberto made:

"We went to place the camera traps in the Arenitas area, and just after a hundred meters from the jeep we found a pair of red-crowned parrots, a highly endangered Mexican endemic which I have recorded before for the reserve, but first time in the Arenitas area. And later finally I found an ornate hawk-eagle (Spizaetus ornatus) a very rare eagle that for years I was hoping to record for the sierra, and finally appeared in that area!"

Learn more about the Sierra Gorda Biosphere Reserve in Mexico

(* Javelina is another name for a Peccary, or Musk hog)