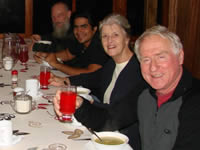 John (in the foreground) and Sally meeting with the Jocotoco Foundation at Tapichalaca Reserve. In the background, from left: Niels Krabbe (ornithologist) and Rene Rivas (Forester at the Foundation) . 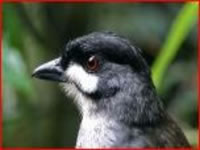 While at the Tapichalaca Reserve, John Sparks had good views of the Jocotoco Antpitta and took various pictures, including this one, which appears in his account of the trip.

Former Head of BBC Natural History Unit, Dr John Sparks has been a friend of the World Land Trust for a long time. He has travelled all over the world making wildlife films, including five of Sir David Attenborough's Life on Earth programmes.

In January John, and his wife, Sally, visited Ecuador and spent time at two of the reserves owned and managed by WLT's Ecuadorian partners, the Jocotoco Foundation: Buenaventura and Tapichalaca. He has recently posted a wonderfully illustrated account of his visit on his website.

Amongst the birds John saw was the endangered Jocotoco Antpitta. Here is an extract of John's account of meeting these birds, sometimes described as 'melons with pogo-stick legs':

"Franco duly sliced up the long, juicy forest worms and called the Antpittas. They needed no encouragement because within a minute or two, we got our first view of these secretive, groundliving birds."

"The adults were recognisable by their very white cheeks – the immatures were less distinctly marked. One juvenile was 7 months old and another only about one month. It is thought that in this species, the older young help their parents to rear their younger siblings. If so, I might have obtained some proof of this trait because I managed to obtain some shots of the two youngest birds in deep cover by changing the sensitivity of the camera to 1600ASA (no flash equipment is allowed on this site)."