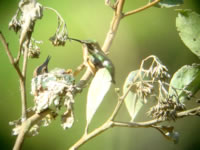 The Ayampe River valley (top), home of the Esmeraldas Woodstar hummingbird (above). Click on the images to see larger versions. 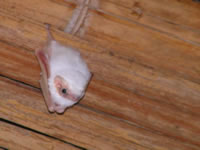 The Northern Ghost Bat, about which little is known. Click on the image to see a larger version. 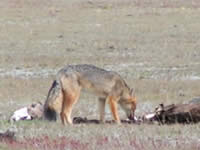 Andean Fox (also known as the Paramo Wolf) in Antisana. Click on the image to see a larger version.

"Ecuador is remarkable in the diversity of its natural habitats and the range of species they contain – this is why it is such an important area for the World Land Trust. In February, Nigel Simpson and I were lucky enough to be part of a team from our Ecuadorean partner, Fundación Jocotoco, exploring two, wholly different, potential new reserve sites: Ayampe, warm and at sea level; and Antisana, at 4,000-6,000 metres and cold!"

"Near the settlement of Ayampe in the warm, semi-arid, Tumbesian region, where the River Ayampe enters the Pacific, is a pocket of more humid forest. It is one of two known sites of an endangered and virtually unknown hummingbird – the Esmeraldas Woodstar – a bird not much bigger than a bumble bee. Here we saw a male displaying by towering from its treetop perch out of sight in the sky and diving back down to a nearby female, who is then left to do everything else, nest-building, incubating and feeding the young, on her own. It was reassuring to see several nests, some with eggs and one with a tiny chick. The Jocotoco researchers will be returning later in the year to learn more of the life history of this species and work out how best to protect it."

"There were bigger things to see as well – including parties of Magnificent Frigate Birds soaring over and the remarkable Ghost Bat pictured here."

"In contrast, the paramo on the slopes of the high volcanoes of Ecuador is cold and wet. Like alpine meadows, unspoilt paramo is a rich mixture of plants with many beautiful flowers; but years of overgrazing and drainage have degraded much of it and plantation of foreign pine defaced it."

"Antisana is home to some of the few remaining Great Condors of Ecuador, which can occasionally be seen feeding on carcases of dead animals, along with the beautiful Paramo Wolf (really a large fox), shown here."

"The prospect of protecting and restoring up to 100,000 hectares of paramo and of polylepis forest of the lower slopes of one of the great volcanoes could not be more exciting – we await further news from Fundación Jocotoco."

Learn more about the Tropical Forest Project in Ecuador and the reserves protected by Fundación Jocotoco.