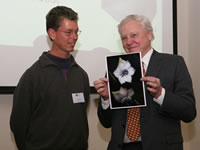 Lou Jost and Sir David Attenborough with an image of the flowers of a newly discovered tree species that will be named in honour of Sir David. 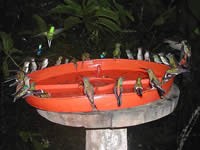 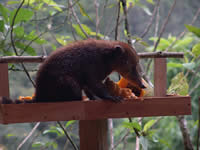 Top: The hummingbird feeder where the 'Puro' webcam is situated. Above: Mammals such as this coati also visit the webcam site. Click on the images to see larger versions.

The Webcam in the Forest project is an ambitious new webcam live stream from the breathtaking tropical forests of Buenaventura, one of Fundación Jocotoco's reserves. Situated on the west slope of the Andes, this area of cloud forest has some of the highest avian biodiversity in the world and the webcam is currently focused on a nectar filled hummingbird feeder and a feeding platform behind. The webcam is in a prime position to film the incredible variety of birds that come to the feeders which include more than 30 species of hummingbird, tanagers and fly catchers.

The project was officially launched by the Trust's patron, Sir David Attenborough, on Thursday the 17th of January to an invited audience in the Lecture Theatre of the Linnean Society, London. The launch was sponsored by PriceWaterhouse Coopers and the webcam project is being funded by Puro Coffee. The 'Puro' webcam offers a real insight into what it is really like inside tropical forests and the bird traffic around the feeders is breathtaking. As well as an ever changing kaleidoscope of hummingbirds you may also catch a glimpse of the local mammal celebrity known in Ecuador as "cuchuchu" (a coati), or one of the two species of toucans who are regular visitors.

The live webcam stream is featured on a new WLT website www.wildlifefocus.org where you will also be able to view other exciting multi-media features such as virtual rainforest tours and wildlife videos.

To celebrate the launch of the webcam we are be offering a fantastic prize: A week's accommodation at the Umbrella Bird Lodge in the Buenaventura reserve for the first person who discovers a new species of hummingbird whilst watching the webcam. All you have to do if you think you have discovered the 33rd species is freeze frame the footage. You can find full details on this competition on the Wildlife Focus website shortly.