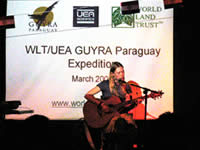 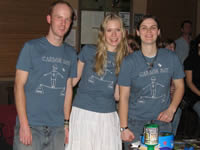 Top: Tracie Long headlining the evening. Above: The three WLT/UEA Diploma students who organised the event.

A South American themed fundraising gig was organised by the WLT/UEA students on the Diploma in Conservation and Project Administration, Martyn Griffith, Tracie Long and Natalie Evans (pictured above). Funds raised will be used towards their research expedition to Paraguay in March, providing assistance to WLT's conservation project partner GUYRA Paraguay. Live semi-acoustic performances from friends, together with home made South American food and snacks, combined to make a thoroughly enjoyable evening. The highlight was WLT's own Tracie Long playing guitar and singing, prompting the staff to question whether she shouldn't be pursuing a career in music rather than conservation. But Tracie was adamant that conservation was what she wanted to do!

The event raised over £450 towards their research expedition.