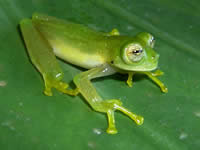 A new species of glassfrog has been discovered in Buenaventura, one of the reserves owned and managed by WLT's Ecuadorian partners Fundación Jocotoco. The frog, named Cochranella buenaventura sp. nov. was discovered in the southern foothills of the Cordillera Occidental, Andes of Ecuador, where it inhabits the Seasonal Foothill Evergreen forests of the province of El Oro. The new species differ from other glassfrogs in several ways, including its truncate snout, reduced webbing between fingers and bright yellow hands and feet discs.

The study, undertaken by the Museo Ecuatoriano Ciencias Naturales (MECN) in Quito, Ecuador, was funded by WLT Trustee Nigel Simpson (The Simpson Education and Conservation Trust) through Fundación Jocotoco.

You can read the abstract of this study online:
Cisneros-Heredia DF, Yánez-Muñoz MH (2007) A New Species of Glassfrog (Centrolenidae) from the Southern Andean Foothills on the West Ecuadorian Region. South American Journal of Herpetology: Vol. 2, No. 1 pp. 1?10