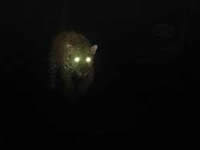 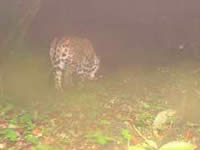 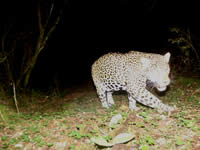 This jaguar, believed to be a male, was snapped by the camera trap no less than seven times! (Click on the images to see larger versions.) The photo were taken by camera traps put up around the reserve by Roberto Pedraza, along with Ben and Alina Lenth.

We just received these images in an email from Roberto Pedraza of Grupo Ecológico Sierra Gorda in Mexico. About the photos, which were taken with camera traps, Roberto wrote:

It was again in the Joya del Hielo area (in one of our private nature reserves), were we photographed the first jaguar and now this one, but we are sure is not the same. This is a huge fat guy and has a different spot pattern, so I guess the first one was the lady (also because they are sharing the same area) and this guy is the male. It was so much joy to find these photos!

Robeto was on his own when checking the cameras and after seeing the photos of this large cat he spent the rest of the trip feeling like a potential jaguar meal… He continued:

Now we have some new cameras and will be placing them in an excellent area, so I hope in three weeks be able to share with all of you more of the Life in Sierra Gorda's forests.

We can't wait to see what animals the new camera traps will catch!