Human impact in the National Park

Kanguery, the centre of administration at San Rafael, is named after this river, which flows through the reserve.

In my previous post about my visit to Paraguay, I mentioned the long drive to get to the San Rafael Reserve. The length of time it takes to get there is misleading in several ways: Firstly because the road conditions make it impossible to drive at normal speeds, making the distance from the capital seem greater than it actually is and secondly because the reserve location, although in the centre of the National Park, is surrounded by privately owned properties, where land owners continue to use the land for cattle, timber extraction or agriculture. Also nearby is a wedge of land which is not part of the National Park, but cuts right into the centre, making the protected area vulnerable to illegal logging and poaching. I knew this already, but for some reason I had imagined Kanguery, the reserve's centre of administration and visitor accommodation, to be in the middle of nowhere, a sanctury for wildlife away from human influence. This couldn't be further from the truth; the reserve is worryingly accessible. The road to it may be nothing more than a dirt track, but it goes right through the reserve and is still sometimes used as a route to the communities on the other side of the reserve, despite the existence of a newer road around the Park. I could see and hear human activities everywhere, from the fires burning on the neighbouring land and the white dots of the cows grazing in the distance, to the sound of motorbikes on the track and the litter left behind by those travelling through (drink and food cans, used nappies, discarded clothing etc.).

On our first day at the reserve, Mark Gruin, Head of Operations for WLT and Rodrigo Zárate, Reserves Manager for Guyra Paraguay, and I set off early in search of birds. There were regular interruptions from motorbikes and horses on the track but despite this there were plenty of birds to be seen – or heard at least, including some rarities: Whilst I was off taking photos of the forest Mark and Rodrigo spotted a woodpecker species not previously seen in San Rafael. Typical! Butterflies fluttered around in their hundreds and crickets (or whatever they were) turned the volume up and down as if on cue, but the continuous sounds of human activity kept reminding me that we weren't far from civilisation. 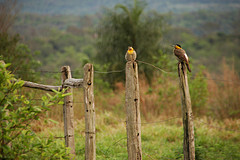 Kanguery is prefect for the lazy birdwatcher: It's possible to see lots of birds without even leaving the guest house, both around the centre itself and in the grasslands surrounding it. These are Field Flickers (Colaptes campestris).

Wildlife in the Atlantic Forest

Although the reserve isn't as remote as I imagined, it does a good job of protecting what is left of the forest, which is still big enough that it would be easy to lose oneself if venturing away from the tracks. The vegetation around Kanguery (like much of the rest of the park) is secondary forest: it was abandoned by the previous land owner after all the good wood had been removed and the land grazed by cattle for a while, but in 20 or so years the forest has recovered quite well. There are few really tall trees, but there is enough cover for it to "feel" like a forest and there is no shortage of wildlife: Apart from all the birds, mammals such as tapir, maned wolf, deer and monkeys are all found here – even jaguars, although you'd have to work hard to spot one. 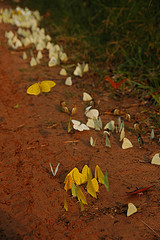 Butterflies in masses, flocking to drink from the soil on the track.

On our first day of bird watching, we went for a late afternoon walk through a different part of the forest, away from the road. Nearly dusk, there wasn't much light under the canopy, and birds were hard to see. But the subtle waving of reserve guard Reinaldo Sánchez alterted us to something else moving amongst the trees: A group of coatis (Nasua nasua) making a hasty retreat. I would love to say that I'd seen them, but to be honest all I saw was some blurry shadows moving down the tree trunks at great speed before disappearing into the dark of the forest. But still – I hadn't expected to see any mammals at all, so was very pleased indeed.

With Guyra Paraguay in the process of securing more properties within the park, the future looks promising for the wildlife still surviving in the Atlantic Forest, and with their restoration ecology initiatives, the re-generation of the forest is being given a helping hand. More about this in my next post… 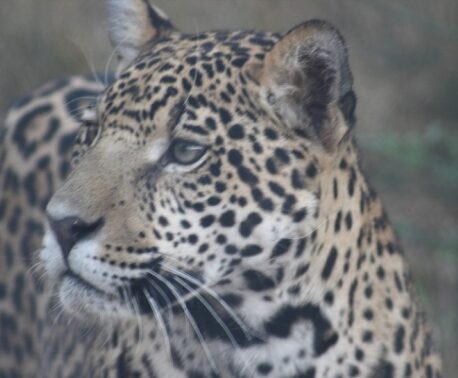 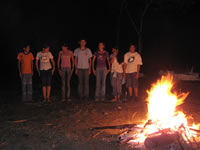