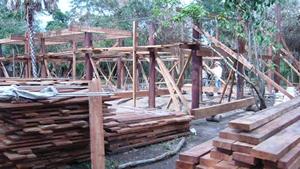 The lodge building work in progress… 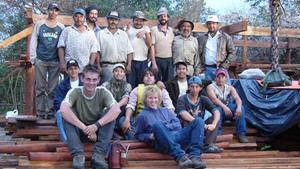 …and the builders, taking a well deserved break.

Funded largely by WLT Council Member, Kevin Cox, the Three Giants Lodge, in Guyra Paraguay's Pantanal reserve, is now becoming a reality. WLT Partners, Guyra Paraguay, have overseen the construction of the lodge itself. The Three Giants Lodge is so named because of the three endangered 'giants' found in the reserve area: Giant Otter, Giant Anteater and Giant Armadillo.

Guyra staff member, Pepe Cartes, wrote to us recently saying that the workers building the lodge had, several times, come face to face with a Jaguar who appeared to be curious about what was going on. They have decided that basic security rules need to be established at the Lodge! He also said that Giant Otters were seen most days and that the workers had developed special calls to attract them; they too are interested in the activity and seem to enjoy the workers' presence. John Burton, WLT CEO, who has yet to see a Jaguar in the wild, is hoping that he might come 'face-to-face' with a Jaguar on his visit to the Three Giants Lodge later this year.