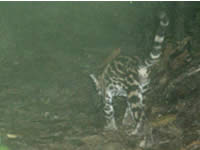 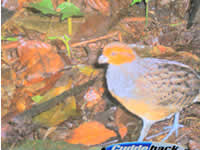 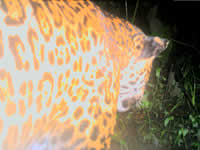 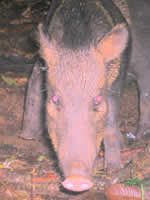 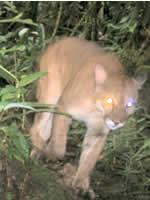 Some of the animals captured by the cameras at Río Canandé and Bunaventura. Click on the images to see larger versions.

Volunteer Ivan Samuels has been busy in the Fundación Jocotoco reserves putting up camera traps to film wildlife as they go about their business undisturbed. These cameras, equipped with infrared triggers, not only photograph wildlife which has not been seen by humans, but also provides invaluable information on the wildlife and their preferred habitats.

The Canandé Reserve protects one of the last remnants of intact forest in a region that has been heavily cleared and fragmented for plantations of bananas, oil palm, pepper, and other export crops. Designed to protect a suite of critically endangered birds in the Chocó region of Ecuador, the reserve benefits other animals as well: The Jaguar, filmed in May, can roam safely in the more than 3,000 acres (1288 ha) that the Canandé Reserve protects.

The animals pictured here are, from the top: Ocelot (or possibly a Margay), Tawny-faced Wood Quail, Jaguar, Collared Peccary and Puma. All were photographed at the Canandé Reserve apart from the Puma, which was captured at Buenaventura.

The cameras have also captured antpittas, a host of Rodentia – and the legs of many of the bird watchers using the trail!