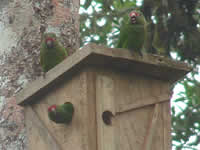 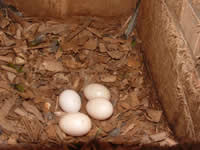 El Oro Parakeets on top of one of the nest boxes (top) and eggs laid by one of the parakeet pairs. Click on the images to see larger versions.

The El Oro Parakeet was only discovered in 1980 and not described until 1988 and it is only known to occur in the Buenaventura reserve which is owned and protected by WLT's project partners, the Jocotoco Foundation.

In an attempt to boost numbers, in 2006 FJ installed 39 next boxes which have been closely monitored.

The boxes have proved to be very successful so far, and we recently received reports that at least 10 eggs had been laid in three of the boxes.