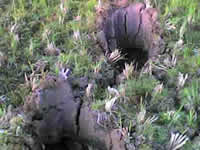 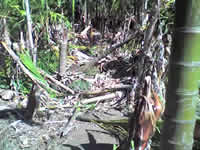 Evidence of the elephant presence: Footprints (top) and damage to trees. Click on the images to see larger versions.

About 9 acres of the land have already been purchased. The four families who sold it to WTI have moved out and are now farming elsewhere, and elephants have already started using the corridor, as can be seen in the photographs.

The vacated lands include those previously leased to the occupants by the government and the owners have have already transferred all the rights and the land to Forest Department. Meanwhile, WTI has approached the government requesting them to protect the area as a reserve forests and/or declared a part of the wildlife sanctuary.

(From a report by Dr.PS Easa /WTI)