Give a little, save a lot this ‘National Giving Week’ SEARCH NEWS

Did you know the 16th to 22nd October is National Giving Week in the UK?

National Giving week encourages everyone to think about what is important to them and support a charity with those aims. This year's National Giving Week is launching a new, thought-provoking campaign with the theme of "Give it up for …" 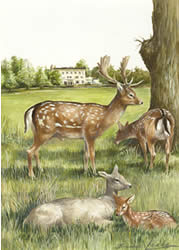 There are already lots of things that people do to support their favourite charities, not least sending donations, but the idea that one can make a stronger commitment is an inspiring notion. What would you be willing to give up for your favourite charity? A night out with friends? Driving to work? Some of your possessions

To coincide with National Giving week the World Land Trust holding an eBay for charity ‘Rainforest auction’ of items which have been generously given to the WLT to raise money for wildlife conservation projects. JAGUAR print by Terry McManus to be auctioned from Monday the 16th.

The items for sale include a selection of stunning original watercolour illustrations from the “Collins Guide to Rare Mammals of the World” by renowned wildlife artist, and long-term WLT supporter, Bruce Pearson. Other items which include wildlife prints by artists such as Edward Wade, as well as the extremely rare and exclusive Carbon Balanced ‘Carbon Boy’ and ‘Carbon Girl’ t-shirts!

The auction will be running all week, from Monday the 16th to Sunday 22nd of October and will be inconjunction with MissionFish UK. So make sure you don’t miss your chance to bid for these exclusive items and check the website from Monday for direct links to the “live” auction pages on eBay.

Do you have anything to sell on behalf of WLT?

So go on, clear out your clutter, trawl through your treasure, and help support wildlife conservation in “National Giving Week!