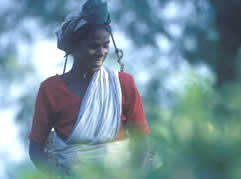 Most of India’s 450 million women live in the countryside, where they rarely own land and have little economic power and yet, when motivated, they have within their power the capacity to bring about important long-term changes. Conservation charity the World Land Trust is working with local partners The Wildlife Trust of India to protect vital habitat for the last populations of Indian elephants and the women of Aretika village have joined forces to work with them.

Many of India's women have little economic power, but by working together they can bring about important changes. Photo © Gareth West & and Stacey Manley.

The World Land Trust (WLT) began raising funds for elephant conservation after being alerted to their plight by the Wildlife Trust of India (WTI), now the WLT’s partner organisation. Over recent months the WTI has identified 88 vital corridors throughout India for elephants to migrate safely, and the challenge now is to work with local people to ensure their protection. India is not short of national parks but it has a burgeoning population, which is taking an increasing toll on the wild lands that survive. Elephants need to move between protected areas and often this can lead to seemingly insoluble human/elephant conflict.

In Aretika village a dedicated local women’s group, whose name translates to the Self Help Group, is working unceasingly to help save the threatened Indian Elephants that depend on neighbouring forests. They have been collecting seeds and caring for a tree nursery that is vital in restoring the forest which links two important reserves in Meghalaya, India. These women are helping to create complete and safe corridors allowing elephants to move freely between reserves, feed over larger areas and breed successfully, securing their chances of future survival.

An Indian Elephant and her calf cross between forest reserves in Meghalaya State. Photo © Gareth West & and Stacey Manley.

By working in partnership with local communities and with the support and enthusiasm of the Self Help Group, the Wildlife Trust of India and the World Land Trust’s Elephant Corridor Project will protect this precious area of forest, which contains one of few safe crossing points for elephants on the Simsang River. In-depth talks have been held with the head of the village, known as the Nokma, and the local communities who are all very supportive of the project. Alternative livelihoods, such as bee keeping and poultry farming, are being introduced to lessen the villager’s impact on the forest and end the practice of jhum (shifting or ‘slash and burn’ agriculture), which is a major cause of habitat destruction.

With help from the local women of Aretika the Elephant Corridor Project is moving forward and realising its aims, meaning that at least the Indian Elephants in Meghalaya will soon be able to move safely throughout the forests.

Please support the important elephant corridor project by making a donation to the World Land Trust.

To learn more about the elephant corridor projects, see the main project page: Help Save the Indian Elephants.