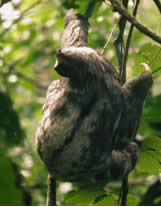 Three-toed Sloth in the Guapi Assu Reserve in the Atlantic rainforest, Brazil.

From 1996-2000 the World Land Trust helped establish and manage an important reserve in the Atlantic Rainforest; Reserve Ecologia de Guapi Assu (REGUA) . The Trust has pledged to once again fundraise for REGUA, and so to investigate how WLT could best help, Projects Co-ordinator, Kirsty Burgess visited the site last month. What she found there (along with her first sighting of a Three-toed Sloth) was a highly active project. “Both energy and enthusiasm simply pour non-stop from REGUA’s Project Director, Nicholas Locke & his wife Raquel,” reports Kirsty in an email back to the WLT office.“From just a short conversation with them and a wander along the nature trails, it is obvious that there is a lot going on, and so much that they still want to achieve.”

The Atlantic rainforest: a high priority for conservation

The REGUA project epitomises the focus of the World Land Trust, which now has over 15 years experience of protecting some of the world’s most biologically diverse habitats, and the combination of high biodiversity and severe loss of habitat makes the Atlantic rainforest, or Mata Atlantica, a high priority for conservation and wildlife. More than 8,000 plant species are endemic to the region (with over 50% of tree species unique to the Atlantic rainforest) and it has been identified as one of the 12 areas with the highest numbers of threatened bird species in the world.

Unfortunately, this outstanding ecosystem has suffered from severe loss of forest habitat with just 7% of the original area remaining, and is therefore considered one of the most endangered eco-regions in the world. All that remains are fragmented patches of forest and so the priority is to ensure that those areas are protected to prevent any further loss of biodiversity to the region, which led to WLT’s decision to support this project.

The WLT are working in partnership with REGUA to protect an area of this threatened habitat that will support viable populations of species dependent on the forest for their survival. The reserve is located 80km north-east of Rio de Janeiro, in one of the largest areas of Brazil’s remaining Atlantic rainforest, and contains large areas of land that have had a relatively low level of habitat loss and human disturbance, making the site even more valuable for its abundant wildlife, including the critically endangered Buffy-headed Capuchin, Collared Anteater, Puma, Jaguarundi and 18 species of bat. Much of the biodiversity remains unknown and it is hoped that one day the site might even be home to jaguars.