With Daryl Hannah in the Rainforests of Belize SEARCH NEWS

Daryl Hannah in Belize, preparing for a photo shoot.

At the end of July John Burton of the World Land Trust (WLT) took a small group to see the rainforests of Belize. Film star and environmentalist, Daryl Hannah, was accompanied by three journalists: Simon Barnes of The Times, David Tomlinson and Alison Jane Reid. The latter was to interview Daryl Hannah for a feature in ‘Hello’ Magazine. For the ‘Hello’ feature Daryl was also accompanied by a photographer, Nana Varveropoulou, who by the end of the visit had become committed to helping the WLT save more forests. John says:

"The visit was sponsored by Jaguar Cars, who have been supporting conservation efforts in Belize for nearly 20 years. It gave us a great opportunity to show journalists what has been achieved, for them to help publicise the work of the Programme for Belize (PfB), WLT’s partner organisation." 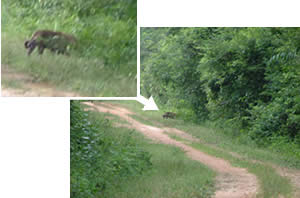 Journalists Simon Barnes and David Tomlinson were not only lucky enough to spot a jaguar, but also managed to get a snap shot of the big cat before it disappeared into the jungle.

"We stayed at La Milpa and Hill Bank research stations in the Programme for Belize cabanas – not perhaps comparable to the international hotels that one might expect Hollywood stars to stay in, but Daryl, like everyone else, was delighted with the accommodation and the delicious food served to the researchers and visitors."

"The day that I took Daryl Hannah to see the Maya Ruins of La Milpa, Simon and David (both keen birders) went off with the Programme for Belize expert guide, Vladimir Rodrigues, and they saw a jaguar. I didn't. I have been to Belize around 20 times and NEVER seen a jaguar. They had been there barely two days and saw one. And got a snap shot to prove it."

One of the large, furry spiders the group encountered. See a larger image. (Use your back button to return here)

"But we saw plenty of other wildlife – Ocellated turkeys, a regional endemic were in flocks along the roadside at dusk, and Daryl spotted a Morelet’s crocodile when we went spotlighting on the New River Lagoon at night. Yellow-headed Parrots, Great Currasow, Keel-billed toucan, King Vultures, Grey Foxes were just a few of the larger animals, and for the less squeamish, our guides were able to find some nice large furry spiders. Even the most arachnophobic of the group ended up getting close and realising that they did have a certain charm."

"Unfortunately, the midges, chiggers and mosquitoes were the worst I have ever known them, and we were all eaten alive – but that was simply a combination of the time of the year and heavy rains. And in no way did it deter any of the party from trekking through the forest, or scrambling around Maya ruins."

"The visit finished with a day snorkelling on the Barrier Reef, which is a real contrast to the rainforest. This trip gave everyone an idea of what Belize, and in particular Programme for Belize has to offer."

Two weeks after the Belize visit, two members of the PfB staff came to the UK for the the British Birdwatching Fair. They shared the WLT stand and from the enthusiasm shown by visitors it seems that many are now planning trips to Belize. Staying at the Programme for Belize’s stations is easy, and modestly priced – for more information visit the PfB website, or contact the World Land Trust."