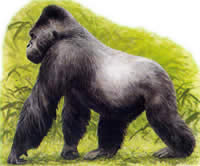 John Burton, CEO of the World Land Trust, discusses the use of popular, ‘cuddly’ animals to raise funds for conservation.

Changing attitudes to gorillas and other wildlife

Back in the 1970s I was closely involved in starting the Mountain Gorilla Project. David Attenborough had just returned from Rwanda where he had been filming the Gorillas for his TV series Life on Earth. And Digit, the ‘star’ had been killed by poachers. I was running the Fauna and Flora Preservation Society (now FFI) at the time, and he contacted me to see if we could do anything. We got together with a group, which included Sandy and Kelly Harcourt, (young gorilla researchers) Brian Jackman (a travel writer on the Sunday Times). As a result, an appeal was launched the following weekend in the Sunday Times, which raised several thousand pounds for gorillas. A clear demonstration of the effectiveness of using flagship species.

Although difficult to remember now, not long before gorillas were still being perceived as aggressive, nasty, dangerous brutes. In fact, I grew up in the post war era when whales were thought of simply as cheap food, unrestricted by rationing, and going off whaling to the Antarctic was a huge adventure if you were lucky. It took several years of campaigning to actually change that attitude. Changing attitudes to gorillas, bats, snakes, whales and many other animals was an important part of the conservation movement’s activities in the second half of the 20th century. And we now have a generation growing up not realising these changes had to be made. But have we been too successful? Are we now obsessed with the animal ‘stars’ and ‘celebs’ as much as soap opera celebs, pop stars and designer labels?

Are we forgetting less popular animals?

Twenty five years on, I am now questioning the use of so called flagship species. Because they are popular, there is a bandwagon effect, and lots of organisations start trying to cash in and raise funds. There is duplication of efforts, there is overlap in activity, there is even sometimes contradiction of efforts, but worst of all, there is a huge waste of effort, with a lot of funds being misdirected, into salaries for fund raisers and administrators. To continue with the same example, gorillas have now become a multi-million dollar business. It is probably safe to say, that there are now more people making a living out of Mountain Gorilla conservation, than there are Mountain Gorillas. There are glass gorillas, pottery gorillas, gorilla masks, gorilla medals, gorilla T-shirts, and gorilla postage stamps. The list is endless. Google reveals 550,000 results for gorilla, including 62,000 for Mountain Gorilla alone. And the Panda gets a return of over 1,000,000. But poor Babirusa returns only 2,900 sites (mostly zoos). And Kitti’s Bumblebee bat, one of the rarest bats in the world, a mere 78 results. The Jocotoco Antpitta manages only two – and one of those was on the World Land Trust site. Yet the conservation needs of all these species are just as urgent as gorillas.

I am certainly not trying to suggest that conservation efforts are not needed for Mountain Gorillas, Pandas, or many of the other flagship species. But I am suggesting that before donating the public should think long and hard, and make sure that the organisation they are supporting really is doing something effective for the species they claim to be saving.

My conclusion is that flagship species are very useful to draw attention to conservation issues, but all too often they have become ends in themselves; and are not really helping conservation to their full potential. At the World Land Trust (WLT), we have recognised the potential of the flagship species, the Puma, Guanaco, Right Whales and Killer Whales that are found on and around the reserve at the Estancia La Esperanza in Patagonia. But our objective is to conserve the 15,000 acres of the reserve as this will also protect the Maras, Burrowing Parrots, Ovenbirds, Burrowing Owls and many, many other species, predator and prey alike – a complete ecosystem. Our Partners in Ecuador have identified areas for conservation by locating the habitats of the rarest birds of the region. When we raise funds to buy these we know that in addition to helping save an endangered bird, we are also saving myriad other species – amphibians, mammals, orchids, some of which will also be threatened, and many of which have yet to be described by scientists.

You can support the WLT's conservation projects by making a donation to the Trust.